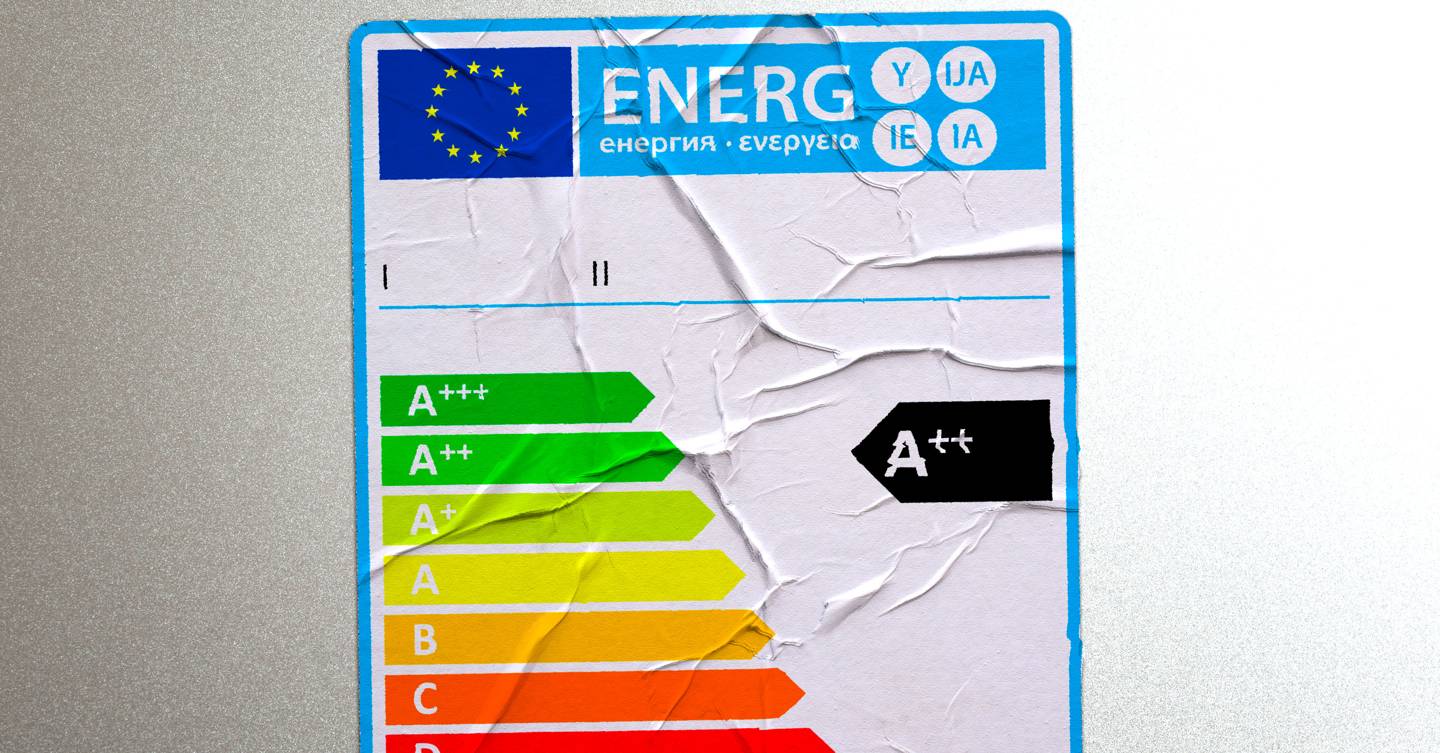 If you’ve purchased a new appliance recently, your decision-making process was likely influenced by the product’s energy efficiency rating. After all, a recent survey carried out by the European Commission (EC) found that 93 per cent of us know and appreciate the now-familiar energy label and that the majority (79 per cent) take it into account when buying energy-efficient products.

As a budding eco-warrior – and somebody keen to pinch pennies when it comes to electricity bills – I took this rating into account when I purchased a new A+ rated Samsung fridge freezer and A++ rated Hotpoint decision in December.

It turns out, however, that in three months’ time, these appliances won’t be as energy efficient as I was led to believe. A second label tucked away in the products’ packaging revealed that, from 1 March, my new dishwasher would be downgraded to an ‘E’ on the energy-efficiency scale, while my new fridge freezer would be rated ‘F’ in just a matter of weeks.

In recent weeks, WIRED has also seen examples of an A+++ rated HiSense TV being downgraded to a D, and a Smeg dishwasher falling from a respectable A++ rating to a less impressive E.

I – like everyone shopping for a new appliance – wasn’t to know this at the time of purchase; the retailer’s website makes no mention of the upcoming changes to the EU’s energy labels, and, at the time of writing, both products are still being listed as A+ and A++ rated, respectively.

So are we being duped, and does this mean our highly rated appliances aren’t as energy efficient as we were led to believe? It’s not quite that straightforward.

The energy labels we’re all currently familiar with have been around for more than a decade. Originally, the energy label ranged from A to D, but as technology evolved and appliances began to use less electricity, the range of ratings was extended and A+, A++, and A+++ were added in 2010.

Technology has caught up once again, which means almost all new appliances sit in one of these the top three categories. This, according to the EC, means the label is no longer fulfilling its original function and may lead consumers to believe that they are buying one of the most efficient products on the market when in fact A+, for example, denotes third place in terms of energy efficiency.

In addition, ever-improving technologies would soon require the addition of another plus sign and complicate the system even further, so a change in the labelling system was somewhat inevitable.

From next month, Europe – and the UK, despite no longer being a member – will revert to an ‘A to G’ rating system, and the first home appliances to have the new label will be washing machines, washer-dryers, dishwashers and cooling appliances. There will no longer be plus-extensions (eg A+++), which, according to the EC, will make the labels simpler and easier to understand.

But in reality it’s not so simple. You might understandably expect an appliance that currently has an A+++ classification to be a top-rated ‘A’ from March, but actually it may now be rated B, C or worse according to the new energy efficiency scale. Right now, it’s impossible to know whether any A+++ will be downgraded to a more respectable ‘A’, for example, nor why products are seeing such a drop in rating.

A QR code on the new energy labels, which consumers are encouraged to scan in order to gain a better insight into the disparity between past and present rankings, gives little information anyone would find beneficial, stating vaguely: “Several adjustments of the calculation methods occur in new labels. Therefore, values may differ and sometimes a lot.”

The EC’s updated guidance also advises that while your A+++ rated appliance will soon lose its market-leading rating, retailers have 14 days from 1 March to ensure scaled labels are displayed. This means if you have recently bought or are buying a new appliance next month, you’re unlikely to be aware of your appliances’ downgraded rating, unless you dig around in the packaging and find a second label, which the EC mandated must be included with appliances shipped from 1 November 2020.

As far as WIRED is aware, not one of the big electronics retailers in the UK – AO, Currys, John Lewis et al – has yet updated their product pages and displayed ratings to alert customers to the fact that this new system is coming, even though they are fully aware of its implementation.

While most failed to return our request for comment, a spokesperson for AO told WIRED: “We are aware of the changes that are being made to energy labels attached to appliances, and are working hard on making sure that this transition is made clear across our site as well as to our customers over the coming weeks.”

WIRED has yet to receive an official explanation as to why retailers are keeping quiet about these new ratings and reductions in classifications for existing stock, but one answer could simply be the need to shift product and clear warehouses. As energy rankings are a proven factor in buying decisions, why reveal an imminent downgraded rating and risk discouraging potential buyers?

AO currently has a significant 15.2 per cent share of the domestic appliances market in the UK, yet the company told us it hadn’t yet been made officially aware of appliances’ new ratings. The retailer could easily have found out, though – as consumers have already been – by merely looking at the second label that ships with the very products it sells. This would apply to all the other retailers, too, looking to inform customers so that they can make an environmentally conscious purchasing decision.

They’re by no means breaking the law – they have until the middle of March to update their data – but pleading ignorance undoubtedly works in their favour. After all, proactively telling consumers that the A++ rated fridge they’re about to buy will soon be rated ‘E’ in terms of energy efficiency means they’re much less likely to buy it. Indeed, eco-friendly customers would likely not want such a product in their house for 10 years or more, the average lifespan of a fridge freezer in the UK.

The EC is keen to stress that the change in rating does not indicate the appliance is less energy efficient, but rather “means that the product has been rated to the new scale levels enabling more efficient products to be higher on the rating scale”.

However, while it notes that it’s likely that currently A+ and A++ rated products could slip to a B or C once the new system is rolled out, it doesn’t explain how my Samsung fridge or Hotpoint dishwasher have slipped to an ‘E’ and ‘F’, respectively, and no consumer guidance has yet been published.

The EC is promising that an “EU-wide information campaign aimed at EU citizens will be launched in 2021”, but we’re now two weeks away from the change coming into force, and consumers are still being kept in the dark about the new system.

While the lack of consumer guidance is frustrating, many have welcomed the change to the current 10-year-old system.

Emilie Carmichael, head of international collaboration at The Energy Saving Trust (EST), a British organisation devoted to promoting energy efficiency, energy conservation, and the sustainable use of energy, says, “The refresh of the energy label is a positive step towards continuing to support consumers to buy efficient appliances today and into the future.

“As recent findings published by Energy Saving Trust show, nearly all UK homeowners are concerned about their home energy efficiency and the new label will be a great opportunity for consumers to do something about that.”

🌌 A rebel physicist has an elegant solution to a quantum mystery

🍪 Google is rewriting the web. Here’s the impact Chrome’s plan to kill cookies will have