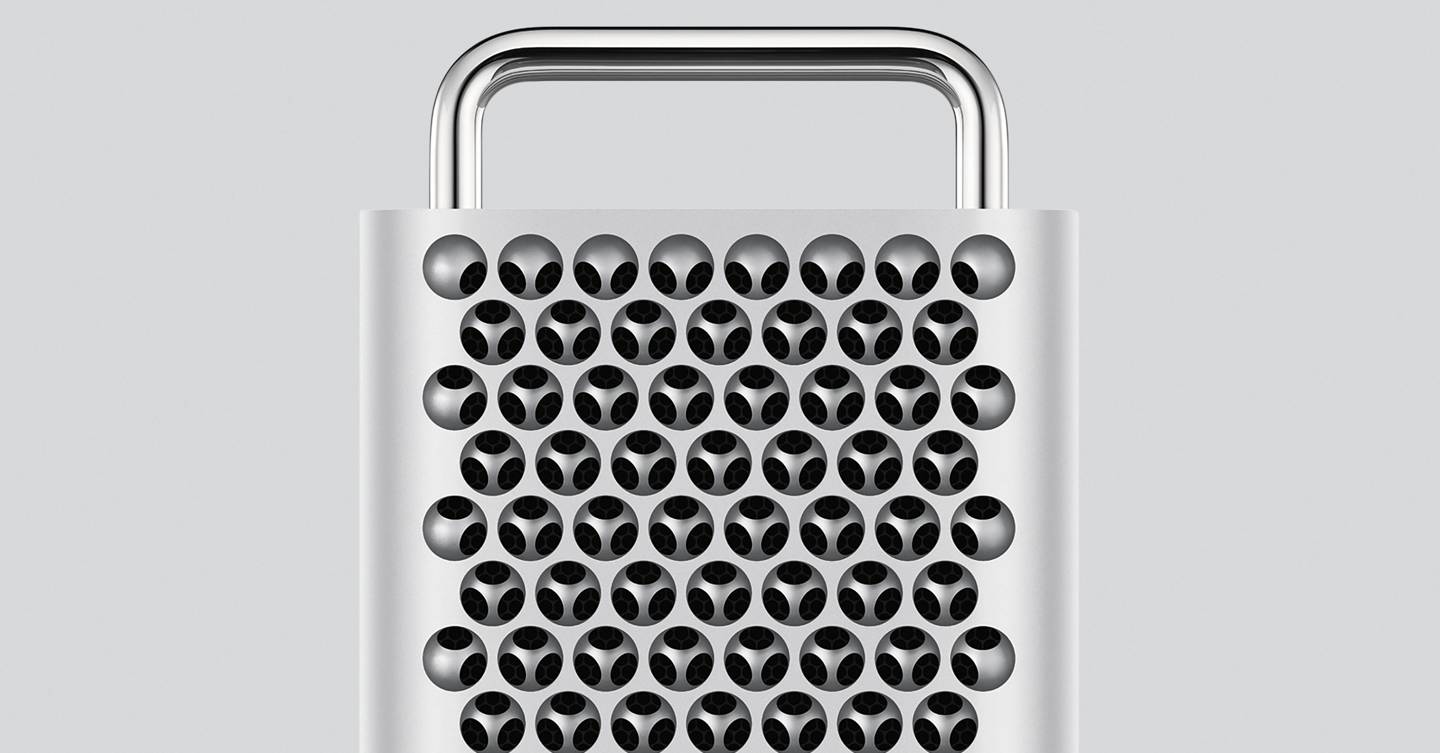 At the end of last year, Apple revealed an overhaul of the Mac Pro. Choosing to abandon the Vader-esque cylindrical experiment from 2013’s second-gen iteration, the company has developed something more akin to a modern twist on the 2006 original metal tower.

But unlike the majority Apple products (notably the 2013 “Darth” Mac Pro, which proved near impossible to upgrade), rampant modification is now encouraged, which also means access to the innards is mercifully unrestricted. So much so that iFixit has given this new Pro a repairability score of 9/10, noting that every part of the machine is user-replaceable.

It’s this modular approach that defines the powerful new Pro. Under its stainless steel frame resides an Intel Xeon processor with up to 28 cores, up to 300 watts of power and up to 1.5TB of RAM. As well as many other bells and whistles (including optional wheels, of course), you can also spec an Afterburner video card that can process six billion pixels per second, allowing for playback of multiple 8K video streams.

All this adaptability means prices can quickly spiral, starting at £5,499 and topping out at just over £49,000 (add in the top-spec and equally impressive Pro Display XDR and it then hits the thick end of £55,000).

Despite stellar specs, it’s not the Mac Pro’s power that’s most intriguing. One design element on the new tower and display has seemingly been in development for an inordinately long period of time: the vents. In fact, these 3D lattice vents appear to hark back to an Apple product from 20 years ago, the PowerMac G4 Cube from 2000.

Part of the Pro’s efficient thermal management system, the vents on the Pro are not designed this way merely for aesthetic reasons. Described by Apple as a network of three-dimensional interlocking hemispheres, the form optimises airflow to improve cooling.

The holes themselves are a negative-space representation of a common atomic arrangement in metallic crystals. The resulting structure is a lightweight lattice pattern that maximises airflow without sacrificing strength. “Versus just a strict grid-hole pattern this has 20 per cent more airflow,” says Doug Brooks, Mac Pro product manager at Apple.

“This allows you us to move air through the system, cooling to maximise performance, and we do it in such a way that we can move quite a lot of air through the system yet have it be very quiet,” Brooks says. “This machine, even though it’s much physically bigger than, say, an iMac Pro or even our old Mac Pro cylinder, it is as quiet as those machines, yet with a lot more power in the system.”

The reason this design can move more air is because it is made up of more ‘hole’ than aluminium. “When we look at the pattern, it’s done by taking a solid block of aluminium and milling out semi-spherical holes in an array, then we do that from the opposite side as well but offset, which creates this unique 3D lattice,” says Brooks. “It’s a combination of maximising open area. Maintaining strength by removing material so it becomes lighter, but keeps a tremendous amount of rigidity. They’ve done a tremendous amount of studies on the whole pattern, the sizes and the ratios and simulations and prototypes.”

This is where the 2000’s G4 Cube comes in. At the WWDC launch of the new Pro a video appeared to capture a conversation between Tim Cook and Jony Ive referencing the G4 and saying some form of the lattice design was developed for the computer. There’s a lot of background chat going on while this exchange is taking place, so make of this what you will. But look at the hole pattern on the back of the G4 and it does indeed look like a 2D version of the new Pro’s vents.

Far more credible evidence of the longevity of the lattice design development comes in a 2015 New Yorker profile of Jony Ive where a version was casually shown off as the design team supposedly did not know what to do with it. While Ive was off making some calls, Bart André, a member of the Apple design team, confesses that his daily routine starts with his “hobby” of designing geometrically complex objects that he would then ask the machinists to mill.

Far from these hobby designs remaining a mere diversion, another Apple designer, Jody Akana, then admits that “we’ll have a meeting about a speaker-hole pattern, or something, and Jony will say, ‘Bart, can you get your box of patterns?’”

André then fetches from his desk something he had been using as a coaster. “Made of hard white ABS plastic – the material of Legos, and of thousands of Apple studio models a year – it was a disk punctured by evenly arranged holes. Or, as André put it, ‘There’s a hexagon pattern of negative shapes that are subtracted from the material from one side, and then there’s the same pattern, subtracted from the material from the other side. But it’s offset, so that the intersection between the two subtractions makes interesting shapes.’”

This three-dimensional lattice pattern described in the New Yorker article is clearly very much along the lines of what is used on the new Mac Pro, so it has to be at least five years old.

But despite being left on the shelf for years, or rather used as a drinks coaster, the usefulness of the 3D lattice doesn’t end with maximising air flow. It turns out this design also has superb heatsink properties, and it’s these properties that contribute to Apple’s Pro Display XDR being reference-quality spec, competing with professional displays six times the price.

“Pro Display XDR is a feat of engineering where the designers were able to take LCD technology and figure out a way to make 1,000 nits of full-screen brightness and a million-to-one contrast ratio available at an affordable price point, relatively speaking in this market, which is pretty crazy,” says Colleen Novielli, Pro Display XDR product manager at Apple.

“But one of the geniuses in this display is using this hole pattern as a heatsink on the back of Pro Display XDR. On Mac Pro it is used to move air through the system, but on Pro Display XDR it actually doubles the surface area of the aluminium and so it acts as a heat sink and draws the heat out of the LEDs,” says Novielli.

To put the power consumption of this display into perspective, Novielli says a rival Sony screen can also sustain 1,000 nits of full-screen brightness. “However, that is eight inches thick, has huge fans operating from 35 to 40 decibels at all times and power consumption is around 280 watts,” she says. “So being able to sustain 1,000 nits of full-screen brightness on a display that is an inch thick and does not have huge fans and operates at around five decibels is a feat of engineering – using that hole pattern to draw out the heat. It’s very, very cool.”

🚙 Thinking of buying an electric car? Read this first

🍅 Why do modern tomatoes taste so bad?