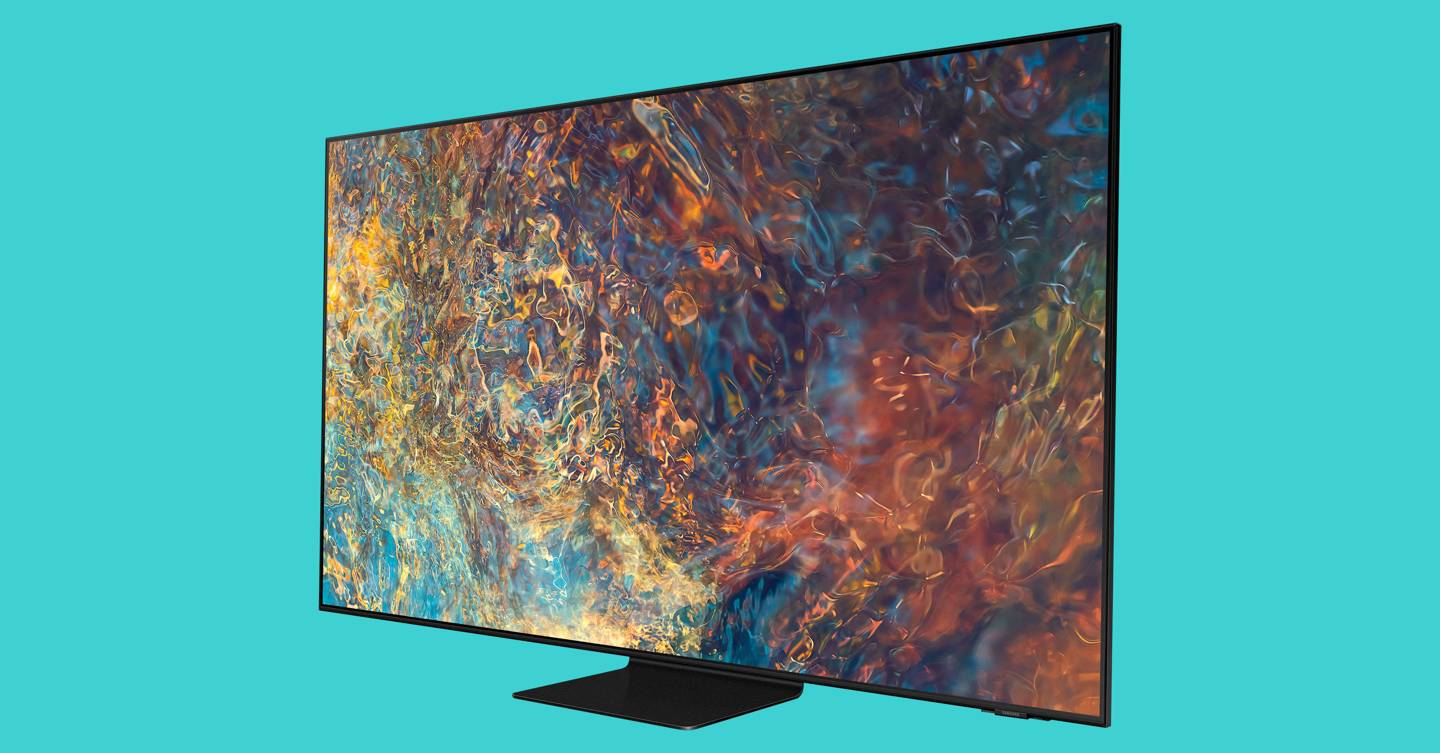 The suffix “… and watch TV” may go unsaid when we’re all instructed to “Stay at home…”, but, let’s face it, that’s what’s been happening. So perhaps now is the right time to introduce a new and (relatively) expensive TV technology to the market, after all.

Samsung seems to think so. Of the big, mainstream television brands it’s first out of the blocks with a range of Mini LED TVs, which it’s dubbed ‘Neo QLED’. And this QE65QN95A is its flagship (and, consequently, most expensive) model.

Briefly, Mini LED is a more effective, more efficient way of backlighting the LCD pixels of a TV screen. Mini LED replaces the hundreds of LED diodes used in traditional panels with thousands of far, far smaller equivalents – up to 40 times smaller, according to Samsung. And as well as shrinking the diodes, Samsung has binned off the relatively bulky lens that guides the light from each diode in the correct direction – it’s been replaced by a much smaller micro-filter to do the same thing.

Shining light through LCD pixels in this manner would seem to be all gain, no pain. After all, much smaller and more numerous LED diodes means much smaller and more numerous dimming zones – and if a TV has more and smaller dimming zones to work with, the theoretical gains in backlighting control, and in overall black tone level and detail, are obvious.

LED/LCD TVs have always lost out to their OLED rivals where the simple depth of black tones is concerned. OLED pixels are self-illuminating – so when they’re off, they’re all the way off. Mini LED promises to close that particular gap.

And OLED TVs have always enjoyed greater showroom appeal because that lack of requirement for backlighting means they’re staggeringly slim. Of course, everyone always overlooks the section of an OLED screen where all the electronics are housed, because it’s just as bulky as any other TV – instead, the bit that’s the depth of a credit card gets all the attention.

But here, the Mini LED arrangement means the QE65QN95A is just 26mm deep – and that’s a consistent depth, with no unsightly lumps or bulges to be overlooked. A 65in screen with an overall depth of 26mm looks pretty skinny, it almost goes without saying.

So for the not-inconsiderable sum of £2,999, Samsung is happy to sell you a state-of-the-art 65in TV. Crisis? What crisis?

As already established, the QE65QN95A is enviably slim. In addition, the fact the bezel holding the screen in place is equally minimal makes the Samsung a real prospect where wall-hanging is concerned.

And to make that case even more cast-iron, the QN95A features Samsung’s brilliantly effective One Connect box. Basically, all connections the TV requires, up to and including mains power, are taken off-board and housed in a nicely discreet box roughly the size of a telephone directory (ask your grandparents). So to receive a signal from any source, the QN95A requires just one slim cable running from it to the One Connect box – so if it’s mounted on the wall, there’s only one cable to be concealed. It makes a very decorative proposition even more compelling.

Obviously the headlines as far as ‘features’ are concerned are the 3840 x 2160 4K resolution, 120Hz panel and Mini LED configuration. But the QE65QN95A’s specification extends well beyond that.

The One Connect box, for example, is home to four HDMI inputs. All of them are specified to a 2.1, 4K @ 120Hz standard – which basically means the Samsung is ready to bring absolutely the best from your next-generation games console. Variable Refresh Rate? Auto Low Latency Mode? HGiG tone-mapping? FreeSync Premium Pro, guaranteeing FreeSync performance from HDR content? Yes, yes, yes and yes. And with response times hovering somewhere between 5.6ms and 9.3ms, the QE65QN95A is a gamer’s dream.

The One Connect box also has three USB inputs, multiple terrestrial and satellite TV tuners, Ethernet and wi-fi, and a digital optical output. So good luck trying to exhaust its options.

Of course, there has to be at least a little fly in the Samsung’s enormous container of ointment. Like all Samsung’s HDR TVs, the QN95A goes without Dolby Vision dynamic metadata HDR – which is a bit daft in general, and approaching unforgivable where a three grand television is concerned. It’s all the more galling when you realise it’s the result of a purely political decision – so it’s about time Samsung grew up a bit and gave its customers what the likes of Panasonic and Philips are happy to provide. Netflix likes Dolby Vision, everyone likes Netflix, every TV should have Dolby Vision HDR. Not difficult, is it?

In an effort to deliver audio quality that will do some justice to its images, Samsung has given the QE65QN95A the latest version of its Object Tracking Sound+ arrangement. OTS+ endeavours to move the sound in response to on-screen action, and in this instance it uses a pair of tweeters concealed at the top of the frame, one more on either side, and a couple of full-range drivers along the bottom. They’re driven by a total of 70 watts of power, which is quite a big figure by the prevailing standards of televisions.

If there’s one area where Samsung’s TVs require no improvement, it’s their Tizen-based user interface – and yet it’s still mildly surprising to find the company has indeed left well enough alone. The interface is clear, logical, easy enough to customise, and features numerous apps from all the subscription and catch-up services you’ve heard of (plus a stack more from those you haven’t). Even the set-up menus, while giving plenty of options for those owners who fancy themselves as television engineers, are friendly and unthreatening.

There’s a small and tactile remote control with which to navigate the interface – and it’s solar-powered, which is way more gratifying in practice that it might seem when written down. If pushing buttons seems a bit low-rent, though, the handset is also fitted with a mic with which to issue voice commands. All worthwhile voice assistants are available.

If you know anything about us here at WIRED, then you know we’re not the types to beat around the bush. So let’s start by saying the Samsung QE65QN95A is capable of deeply impressive picture quality. And let’s continue by saying that, on this evidence at least, Mini LED seems to have what it takes to properly disrupt the TV market.

Black levels and backlighting control are of a completely different order here. Even the most testing scenes – a darkened room lit by a single candle, say – are handled with real confidence and assurance. Black tones are deeper than anyone used to the LED/LCD arrangement will be familiar with, and there’s no discernible backlight ‘bleed’ or haloing around areas of light. So that lone candle gives just as much light as it’s supposed to, with no grey or smearing around the edges. It’s a facility with contrasts, lighting and black detailing that’s much more readily associated with OLED technology.

And the QE65QN95A is far from a one-trick pony. Play to its undoubted strengths with some 4K HDR10+ content and it pretty much completes the nap hand of picture quality positives. Definition of edges is strong and convincing, detail levels are through the roof, and the colour palette is as wide-ranging and lifelike as can be. The all-important skin-tones and skin-textures, in which every viewer is instinctively an expert, are naturalistic too. And where on-screen motion is concerned, whether it’s of the rapid type or the notoriously hard-to-handle slow pan, is handled with complete authority.

None of this comes about if you’re using the Samsung’s ‘out of the box’ settings, mind you. Leave the QE65QN95A to its own devices, and the brightness of its white tones and lividity of its colours will have you squinting. Exercise your authority in the set-up menus, though, and thoroughly absorbing and convincing images are all yours.

This all holds true even if you step down in the quality of source material. The QN95A is fitted with Samsung’s Neo Quantum Processor 4K, and it deploys AI to bring about the most effective upscaling possible – certainly if you feed in some Full HD 1920 x 1080 content, the Samsung does sterling work keeping detail levels high and edges smooth. Contrasts remain expansive, and only the most testing motion betrays just how much work the processor is getting through. There are limits, though, of course – once you get down to DVD-standard resolution or lower, the most notable thing about the QN95A’s picture is how soft and indistinct it looks.

The spec-sheet promises gamers the moon on a stick, and in fairness the Samsung comes pretty close to delivering it. No matter how information-heavy or downright complex a game is, the QN95A not only stays in charge but maximises your experience. All the stuff that’s so impressive about its picture performance from other sources holds true here: depth of field is prodigious, motion is assured, detail levels are stratospheric. And the Mini LED arrangement delivers contrasts as wide as the Chancellor’s budget deficit.

As far as audio quality goes, the Samsung a) sounds better than the overwhelming majority of big, expensive TVs, and b) is no match for a half-decent soundbar. Yes, there is more low-frequency presence here than most integrated audio systems can muster and yes, to an extent the sound does follow the on-screen action. But – and this isn’t the first time we’ve said this, nor will it be the last – don’t think for a moment about spending three grand on a nice new television without budgeting to bring its sonic characteristics up to something like the standard of its pictures. Otherwise the effect is akin to watching the images in an IMAX cinema while listening to someone play the kazoo as a sonic accompaniment.

Overall, though, the Samsung QE65QN95A needs remarkably few excuses making for it. As far as the fundamentals go, it’s deeply impressive. Mini LED, on this evidence at least, is ready to breathe new life into the simple viability of LCD televisions – and give those who hold up OLED as the be-all and end-all of domestic display technology something serious to think about while it’s at it.

💸 The bitcoin elite are spending millions on collectable memes