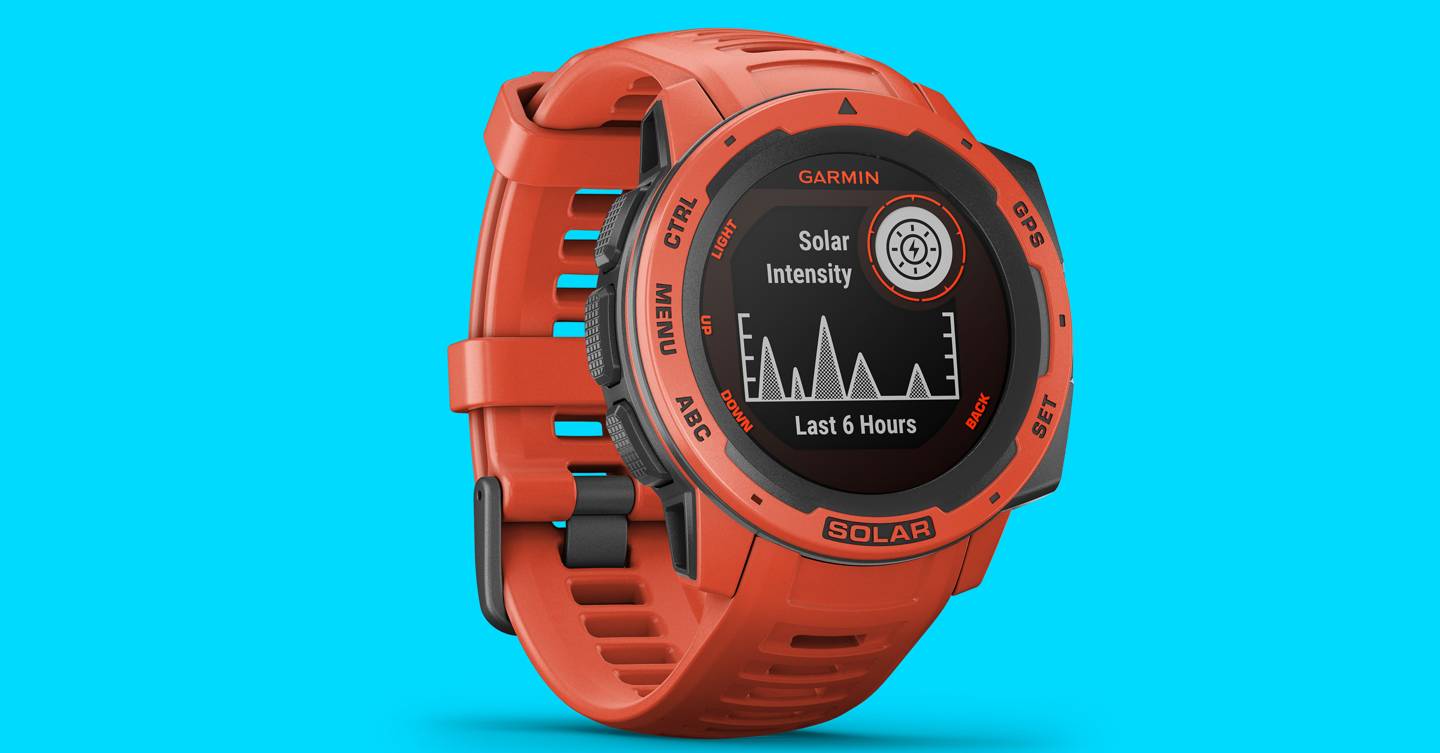 Camping is back on, unlimited outdoor exercise is permitted and Garmin has decided now is as good a time as any to launch three new solar charging sports watches: the Instinct Solar, Fenix 6 Pro Solar and Fenix 6S Pro Solar.

Garmin doesn’t particularly want you to care about solar itself, more what it means for how long you can go between charges. Since the launch of the Fenix 6X Solar last year, though, its outdoor teams have turned what was an experiment into a serious investment. Now we’ve got a much better idea of how useful it could be: in Battery Saver mode the new £350 Instinct Solar has unlimited battery life. If you’re looking for the asterisk and wondering how long unlimited really means, Garmin VP of Outdoor Brad Trenkle “can’t answer this question because we have some devices that are still not depleted.” That’s probably a good sign.

“We use one test to help us understand if case or band colours will fade, yellow, or degrade over time,” says Trenkle. “Usually the devices’ batteries will die. When we went back to check on the solar devices weeks and months later, they were still powered on.” The Instinct Solar has been in development for around 18 months but it was in 2017 that Jon Hosler, Garmin’s senior product manager of outdoor products, put up a slide in a presentation with an infinity symbol: the target became reaching power autonomy on a Garmin watch, “to create a watch that didn’t need to be taken off the wrist to charge, ever”.

You’ll need to take the Instinct and the new solar Fenix watches off the wrist to charge if you regularly use all their (many) sports features, but less so than usual and Garmin thinks that’s enough to make the feature a “premium up-sell” across more of its lines, similar to paying more for sapphire glass or titanium.

The Instinct Solar, which adds pulse ox and Body Battery rest and recovery monitoring to the feature set, is able to more than doubles the battery life of most of its modes if you’re getting 50,000 lux of sunlight for three hours of days. (That’s an industry standard for a few hours outside on an “average global sunny day”, though Hosler says UK summers might not quite cut it). So GPS mode jumps from 30 to 38 hours; Max battery GPS from 70 to 145 hours; smartwatch mode from 24 to 54 days; Expedition mode from 28 to 68 days and, finally, Battery Saver watch mode from 56 days to unlimited.

As per last year’s Fenix 6X Solar, there’s a layer of photovoltaic solar cells that’s below chemically strengthened Gorilla glass, invisible to the wearer and always on, harvesting solar energy. Hosler and his team were able to increase the solar surface area of its ‘PowerGlass’ on the watch dial but what really got them to unlimited/no-charge was less glamorous work on power efficiencies across every component of the device.

It helps that the Instinct uses a 0.9-inch memory-in-pixel display with a default off state of white or fully reflective, with similar benefits to e-ink displays. Compared to other Garmin series, Hosler says, it’s also a very low power platform with a very efficient processor, though the Garmin execs admit that adding new features such as pulse ox does provide more opportunity for battery drain. “You have to be very diligent about making sure every place that the platform is consuming energy, you’re bringing that down as much as possible,” says Trenkle.

Over on the Fenix range, the numbers in days and weeks are less headline-worthy but, considering the sheer capabilities of the watches, and the fact that solar charging is now available for £650 for the 6 and 6S Solar, it should be enough to pique the interest of anyone disappointed not to see a full-blown Fenix 7 this summer. Starting with battery life, the Fenix 6 and 6 Pro Solar sees more modest but meaningful gains: from 36 to 40 hours in GPS mode, 72 to 93 hours in Max battery GPS mode; 14 to 16 days in smartwatch mode; 28 to 36 days in Expedition mode and 48 to 80 days in Battery Saver mode.

As with the Instinct, the main goal is to reduce the number of times you have “that horrible moment”, as Trenkle puts it, of heading out for a one or two hour run or ride and looking down to your watch to find it’s not got enough charge: “We’re sipping battery as you go so you can be on the trail for several days and not have to worry about – am I going to be able to find a place to charge?”

The other piece of the puzzle is the revamped power manager with less fiddly settings. You can set up customisable modes to switch between as you start an activity and these can be as granular as how often you want the GPS antenna to turn on, the backlight settings, wrist heart rate, pulse ox and whether you want to be connected to your phone. And despite the fact that Garmin mostly wants solar to remain as a background feature you come to rely on, there is a watch face with a graph of your last four hours of solar energy, which post-lockdown could be a fun ‘outdoor time’ metric.

As evidence of how serious Garmin is about solar, with “significant” investment in talent, facilities and specialised equipment that is “in the millions”, it has dozens of researchers working in Southern France on a pilot line solar panels and an industrialisation team based in Taiwan who figured out how to make the technology scale. “The Fenix 6X Solar was a really good test for us,” says Trenkle. “Truthfully, we would have loved to have brought it out to more products at that point but we really weren’t scaled from an engineering resource perspective to be able to develop multiple sizes of solar panels. So that’s what we’ve spent the last year doing. Part of the reason that we have to charge more is so that we can recoup those investments.”

Some of the other new features here, such as indoor climbing tracking (including bouldering), a ‘grit and flow ’ score for your mountain bike trail skills and new surf features – which “tracks each wave you surf, shows you the GPS location, how fast and how far you went” – on the Fenix watches and an Instinct Solar Surf edition, have been difficult for Garmin to test in the usual way during the coronavirus pandemic. Trenkle says he’s done a lot more cycling in the past three months than he normally would and after running into problems with beach access, Garmin had to expand its network of testers, with the help of its partner Surfline, to find people who could collect data in California, Hawaii and Australia while parts of the world were locked down.

In future, we can expect to see solar charging across more and more Garmin products. “Anywhere where there is a benefit to extending battery life for our customer and it’s used outside in the day,” says Trenkle. “Cycling, running and marine are great candidates.”