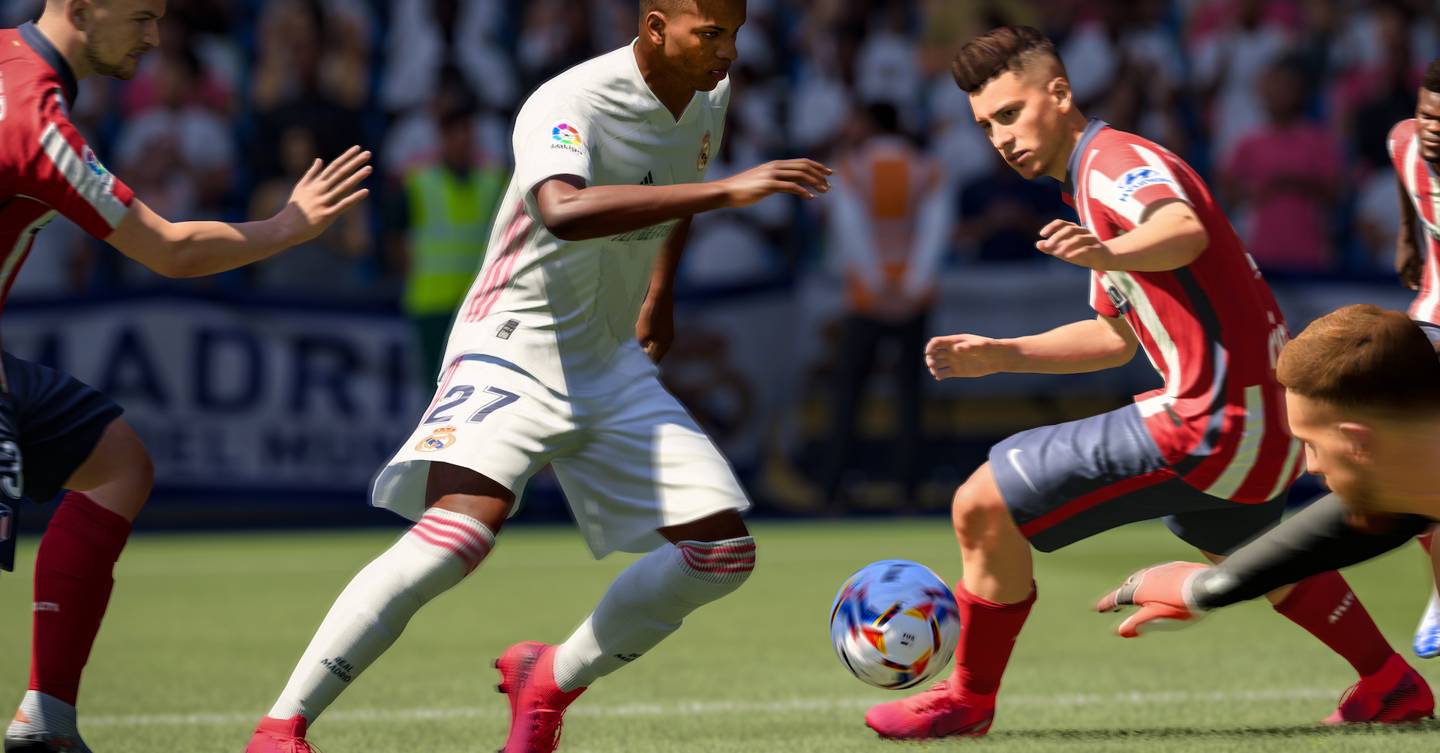 The world might be strange and confusing, but there are still some things you can rely on. Every autumn, a chill comes into the air, the leaves begin to change colour, and EA releases a new edition of FIFA, the all-conquering football simulation franchise.

FIFA 21 arrives at a slightly odd moment for world football, which has been devoid of fans for more than six months in most countries. In fact, for some broadcasters, the piped in crowd noise they’re using to mimic the presence of real fans actually comes from the video game – which is one way of making sure your simulation sounds like the real thing.

In other ways, though, the game feels further from real football than it has a while – particularly at the top level, where Video Assistant Referees have fundamentally changed the way goals are scored and how defenders move around the pitch. None of that is reflected in FIFA 21, which is probably a good thing on balance.

As per usual, EA has made some minor gameplay tweaks and packaged them up as exciting new features. The headlines this year are ‘agile dribbling,’ which enables gamers with deft thumbs to press the right bumper and pull off the kind of fancy footwork that goes viral on social media. That’s in addition to ‘face up dribbling’ and ‘strafe dribbling’. I’m not entirely clear on which situations you’re meant to use the different types of dribbling in, but I do know that playing against someone who knows how to use them properly is absolutely infuriating.

There’s also an emphasis on positioning – good AI players will make better use of space, dropping into pockets to make room for shots as they might in real life, for instance. Gamers will have more control over off the ball runs as well – by flicking the right stick you can trigger a teammate to go in exactly the direction you’ve envisioned before playing that killer pass. There’s even the option to lock to your current player by pressing in both sticks at the same time – ideal for surging forward with quick give and gos.

On the pitch, the graphics are the same as always, but there are some neat new animations to bring the action closer to real life – in one pleasing new tidbit, I saw Kylian Mbappe controlling a chipped through ball on his thigh before racing through to score. The collision system has been tweaked so that players will jump out of the way of slide tackles, and so your own defenders won’t perform impromptu slapstick routines during a goalmouth scramble.

As always, some routes to goal seem particularly overpowered – the deft chip seems to be a particularly dangerous weapon this year (or maybe I’m just too eager to bring the keeper out), for instance, and the developers have tried to make headed goals a thing again after they were almost impossible to score from in the last edition. Things will get tweaked and fiddled with over the next year in response to complaints from players – EA has taken the unusual step of setting up a Trello board so that fans can see the status of particular issues within the game and their progress towards being mended.

One gripe, and maybe this is just me raging against change, is that the commentary team of Martin Tyler and Alan Smith – comfortable and reassuring, like an old sofa – seem to have entirely disappeared from the game. They’ve been replaced by the grating pairing of Derek Rae and Lee Dixon, who were on Champions League duty in FIFA 20, but are now doing every game. I think they do a really good job for BT Sport and ITV in real life, but Rae might have had a few too many coffees on the morning of recording for this, because he shouts everything, and has an annoying habit of over-pronouncing people’s names.

Tyler and Smith had built up a huge library of commentary clips over the years, so it felt varied and natural, with little repetition. That just doesn’t exist yet for Rae and Dixon – so you end up hearing the same audio snippets over and over again (with one exception: Rae seems to have about 17 different ways of saying ‘Bruno Fernandes’).

In terms of game modes, there have been minor tweaks to career mode (you can simulate matches and jump in to take control if it’s going pear-shaped) and to small-sided mode Volta Football, which is surely not long for this world. But EA has poured most of its resource into its big money spinner, the loot-box heavy FIFA Ultimate Team, which has a new co-op mode, and the ability to build your own stadium.

Overall, the game is… sort of fine. If you’ve bought the last few FIFAs, you probably will end up buying this one too – especially since you can get a free upgrade to the next-gen version if you take the plunge on PlayStation 5 or the new Xbox. If you’re only a casual player, or haven’t played for a few years, it’s hard to recommend this edition over its predecessors.

There’s a definite sense that the franchise is in a holding pattern as this console generation comes to an end, and that any big new innovations will likely be saved for the first edition to come to new consoles. It still does a better job than anything else at capturing the joy of football, but it’s a bit like an ageing Edinson Cavani joining Manchester United – fun for sure, but perhaps not the best use of funds.

Amit Katwala is WIRED’s culture editor. He tweets from @amitkatwala

😷 Life is now one big risk assessment. Here are five life rules for staying safe during a pandemic