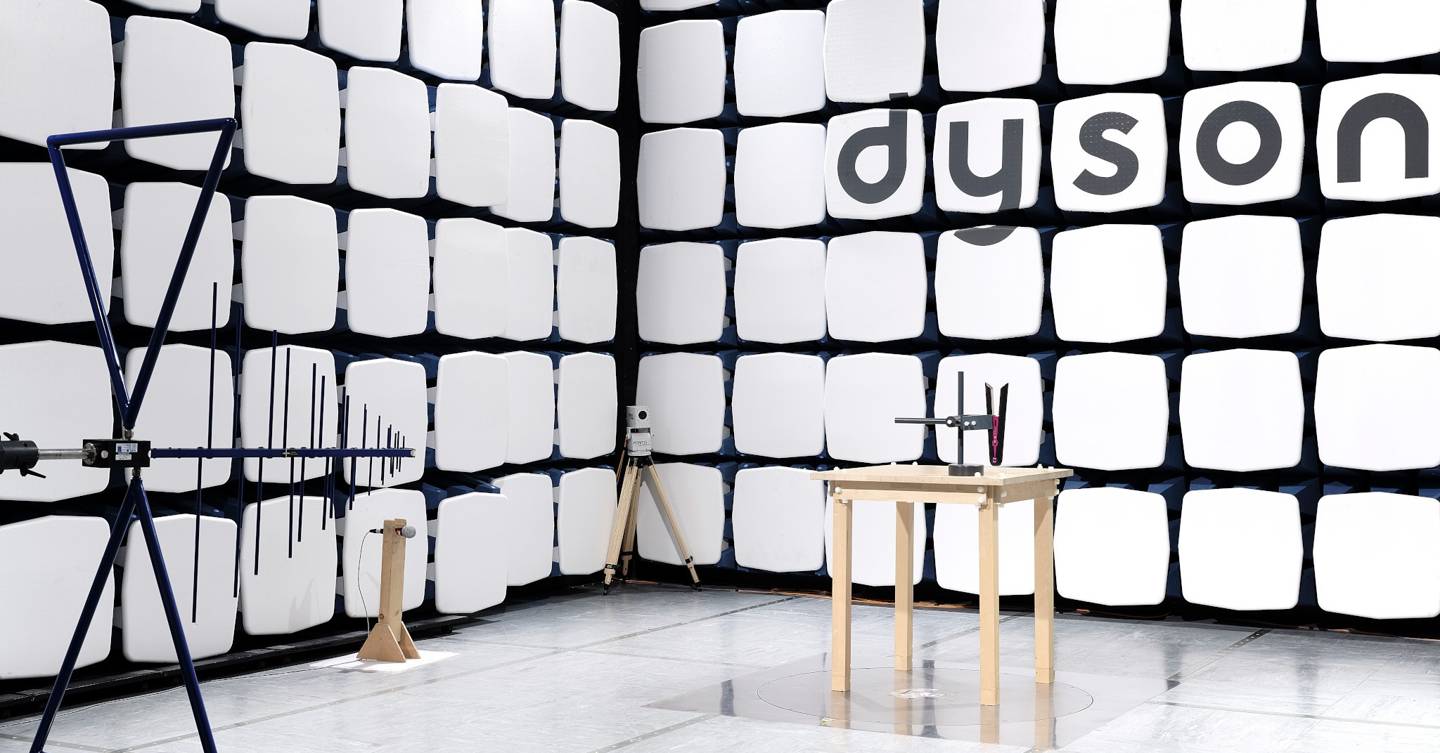 Dyson didn’t just decide to make a pair of hair straighteners. It spent seven years obsessing over them before the reveal this week of the Dyson Corrale.

Inside its Hair Laboratories in Malmesbury, Wiltshire, Dyson has used air pressure chambers, electromagnetic interference labs and product-crushing bunkers to develop and test the latest in its line of (very) premium haircare products.

The standout feature of the £399 pair of straighteners is its flexible plates. Regular straighteners, according to Dyson, have simple, rigid aluminium plates based on 20-year-old tech, which use a lot of heat as they lack tension and control.

The Corrale’s plates flip this around – the flexibility allows more hair to be gathered with even tension, increasing control and spreading heat evenly. This means you can style hair at lower temperatures, reducing the risk of damage and dullness.

Disassembled from the main body, each magnesium-copper alloy plate is incredibly light and flexible. The surface is around 65 microns thin, or the same width as a (thick) human hair. Give them a prod when they’re actually assembled in the Corrale though, and their flex isn’t as huge as you’d expect. Prototypes are made with industrial nylon powder 3D printers such as the EOS P 770.

Dyson engineers settled on the final flex by using a machine used in the food industry to measure the breaking point of biscuits. “Earlier prototypes were more flexible,” says design engineer Dan Evans. “But we found that people felt like the straighteners weren’t doing anything, as the feedback was too soft. We settled on the final level of flexibility which was enough to gather and evenly put tension across the hair, while still letting you feel everything.” Apart from the level of flex itself, the plates are also flexed precisely 422,772 times – the equivalent of two 30 minute styling sessions every day, for five years straight.

Stroll through Dyson’s labs, and, a little disconcertingly, you’ll see tresses of human hair everywhere you look. “It’s a unique material that can’t be replicated, so we use ethically sourced human hair,” says Evans. Studying hair from the inside out, Evans’ lab also went through the painstaking task of manually tying knots into single strands of hair, before capturing the effects under a high-powered electron microscope – the same microscope that more than likely gave you nightmarish close-up photos of dust mites in your biology textbook.

Hair, he explains, has three different bonds in its molecular structure. Salt bridges and hydrogen bonds, and disulphide bonds. The former are weak, and can be broken and reformed (i.e. the act of straightening and styling), without causing permanent damage.

The stronger disulphide bonds however, can’t be fixed once broken, resulting in damaged hair. Extreme measures like chemical straightening and high temperatures cause these bonds to break, hence the desire to style in as gentle a way as possible.

Zoom out a bit, and you’ll find that hair is also made from two main components – a core made from cells that retain moisture, which is then surrounded by cuticle cells. “These cuticle cells are like roof tiles. When they’re flattened out, hair looks healthy and shiny. When they’re damaged, they stick out, and hair looks rough and dull,” Evans says.

Not content with engineering what the team believes are the ultimate straightener plates, Dyson has another lab, filled with giant racks of hair samples, which is used to create an algorithm for perfect hair. Covered in ventilation holes on both sides to create an even air pressure and minimise disturbance, this environmentally controlled lab measures the change of temperature, radius, drying time, style and shine for seven completely different hair types.

In general, hair is classified into different groups, such as straight, wavy, curly and kinky, with each type having numerous subsets that are differentiated by other factors, such as how coarse or fine they are. Incidentally, this lab is also where Dyson has mathematically calculated what a good hair day looks like.

“We created an algorithm based on hundreds of different hair samples,” says Emily Menzies, a senior design engineer. “We took styled hair, and asked people which ones they thought were straighter, shinier, et cetera. Then, we took thousands of photos of each sample to create 360-degree images of each hair tress, to view the effects of the straightener from all angles. We used the data to create an algorithm that automatically detects the style quality of all different hair types.”

Elsewhere, an electromagnetic interference lab – basically a giant Faraday cage – measures the electrical interference given off by Dyson products including the Corrale straighteners. It’s super quiet and covered in ferrite and zinc carbon tiles. The radio system is worth £80,000, the whole chamber around £700,000. Usually companies do this testing, to meet minimum standards to stop electronics interfering with each other, in external facilities.

The bit that’s even more fun though, is crushing product samples with up to 220kg of weight and dropping them from 2.1 metres, without anything exploding, or functionality being destroyed. “That’s like me, wearing a pair of heels, and dropping the straighteners on the ground, before someone else jumps on my back, and I stamp on them,” says design engineer Connor Boyce.

Dyson engineers have live video feeds from other labs around the world, including Singapore and Shanghai, so that they can see what they’re working on, and take over development when one shift ends, and the other begins. Part of this is taking apart competitors’ products to see how they tick, and compare. “It’s true that you get what you pay for,” says Boyce. “How much do people value safety? There’s some concerning stuff out on the market. If you take other products apart, some are literally held together with tape.”

📺 The best shows coming to Disney Plus UK

💩 Gender neutral toilets are a massive failure (so far)